I don't own a SCI Model 800 Sequencer but was sent a 1976 with serial number 0041 for repairs.  I am documenting these vintage instruments since there is so little information available.  This early version has 6 memory ICs for a 24 bit word with 10 bits of resolution for the CV and 12 bits of timing information.  It uses a Zytex ZD431 DAC module.

This Sequencer is full featured.  It records both the CV and the timing information of each note.  It can be played back at half speed, normal, or 2X and has a variable speed control.  Individual banks can be recorded and skipped on playback.  It will sequence to the next bank when the current bank is complete or it will cycle back to bank 1.  It has individual record start and stop controls and a footswitch for control of clock and record.  Notes can be edited by re-recording them one at a time.  It has external inputs for stop and can be used to record just triggers for a beat track.  It is a shame that the memory is volatile.  It would have been nice to add a battery backup on the memory.  Note the extra switch and LED between Step and Reset.  This allows the recording of a rest.

The PCB has no solder mask nor any nomenclature other than the SC logo and is unwashed.  It definitely looks early.

The mechanical construction is a bear to work on.  All the primary wiring is exposed and the cabling to the front, side, and rear panels is all soldered to the PCB so it can't be removed.  You can remove one side and bottom and unscrew the other three sides to mostly access the PCB.  Turning it over to solder and unsolder is difficult as everything is loose.  The exposed primary on the power switch is very close to the PCB and some front panel wiring is bare so one has to always check that nothing is shorted. 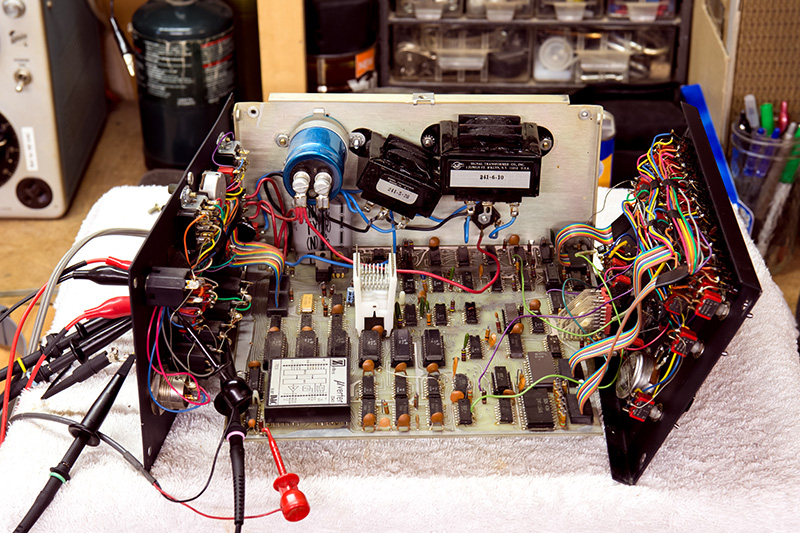 Mark Glinsky graciously provided schematics and permission to repost.  They are fairly low resolution so it is hard to make out part numbers and pin numbers but they provide an overview of signal flow and architecture.  Troubleshooting is slow because there is a lot of hunting to track signals and it is difficult to access parts.  This circuit has a number of one-shots, multiplexers and up/down counters.  Most of the issues were physical damage to components and various TTL parts.  Luckily the memory, successive approximation register, and the DAC were good.

This image shows the CV and Trigger input and the CV and Trigger outputs during recording.  During recording the outputs follow the inputs but in this image you can easily see the sampling point of the CV input.  There is a very narrow glitch on the CV Out at the sample point.  I didn't investigate further but suspect it is the successive approximation cycle.  The DAC is used as part of the successive approximation loop and the CV Out comes directly from the DAC.

This image shows playback of the CV Out and Trigger Out in position 1 (5V positive trigger).  The CV In and Trigger In are on the scope for reference.  Note the playback is ~2X faster than the original input signal - something more to investigate. 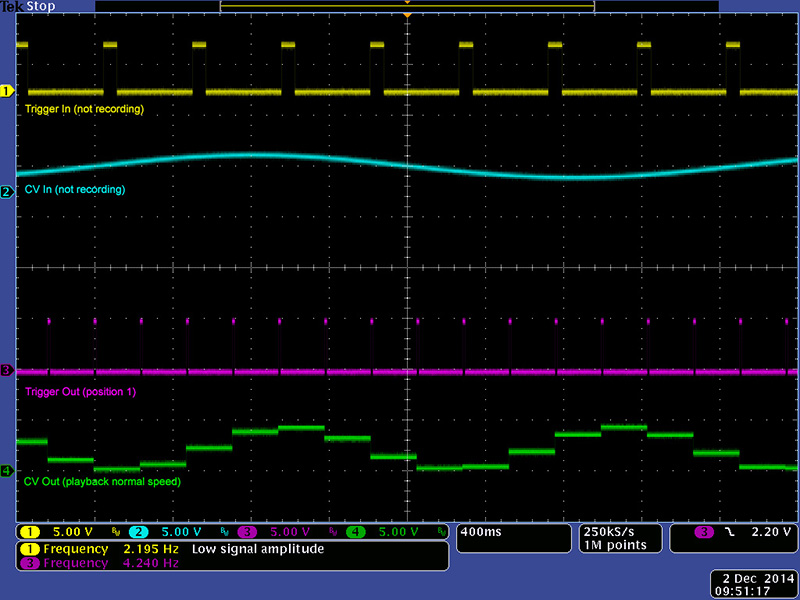 This image shows the same playback of the CV Out and Trigger Out now in position 2 (15V negative). 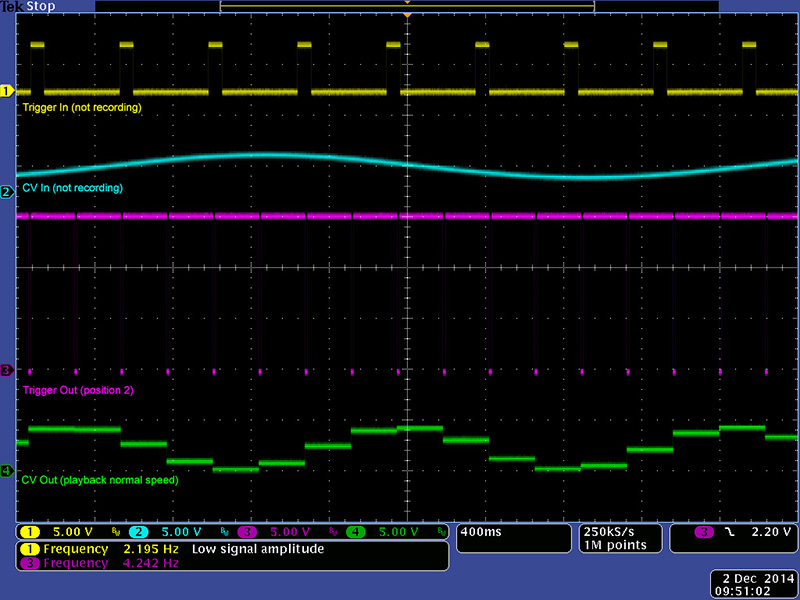 This image shows the same playback of the CV Out and Trigger Out now in position 3 (5V negative). 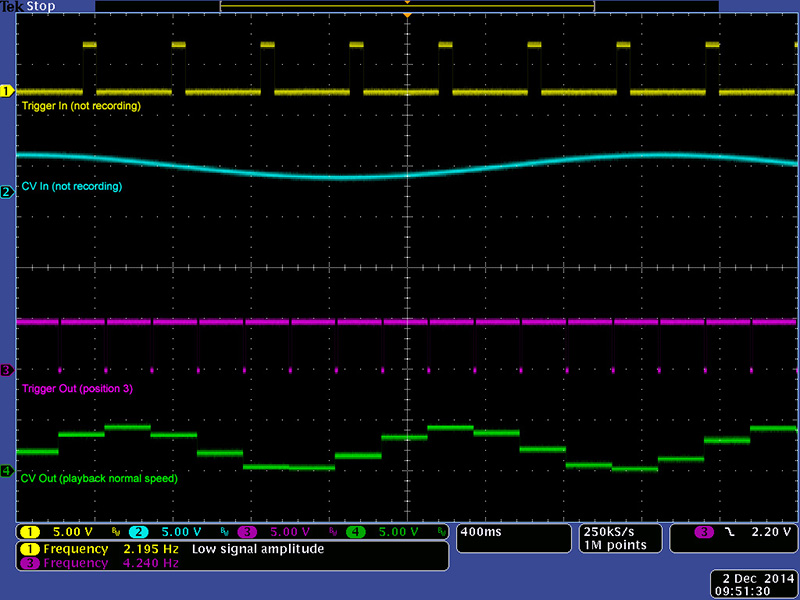 This image shows the same playback in half speed of the CV Out and Trigger Out in position 2.  Note that the frequency is nearly the same as my original sampled input signal. 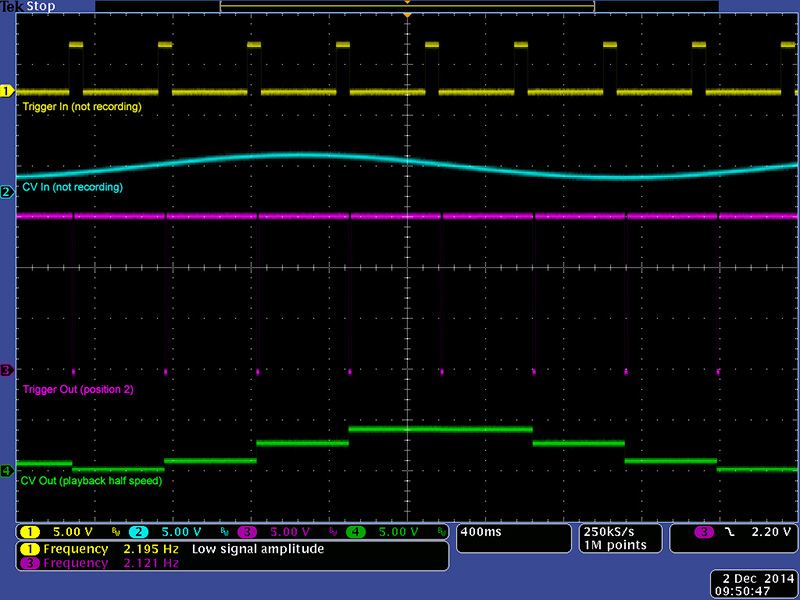 This video shows the SCI-800 in operation.  It takes a bit of work to record each of the banks.  I filled all 256 notes with glissandos to verify all the notes and banks worked.  I then recorded bank 1 and bank 16 with a sequence.

The same owner sent me a second SCI Model 800 Sequencer for repair which is 1980 with serial number 0330.  This is the later version with 5 memory ICs for a 20 bit word with 6 bits of resolution for the CV and 14 bits of timing information.  It also has a discrete DAC.  With only 6 bits of resolution it records semitone values for a near 5 octave range.  There is a nice summary on restoring a Model 800 Sequencer late version on the Keith Robert Murray site.

The spacing of the two transformers changed on the late model to better fit the panel.  The striped wire bundle in the middle is for a -Slave disable switch that someone added on the front panel.  Apparently they didn't have access to wire cutters!

The controls and waveforms are the same on the late model.  The PCB has solder mask and etched nomenclature and is washed so it definitely looks like a mature product.  You can see the discrete DAC in the upper right corner and only 5 memory ICs.  Two are in sockets for some reason.

While the waveforms look the same between units, I took the opportunity to look at the glitch at the beginning of the CV Voltage sample.  It is definitely a successive approximation cycle as shown on this zoomed scope image.

This version has trimmers for offset and scale.  I setup two VCOs tuned the same and drove one from the CV In and one from the CV Out so I could listen to the tuning difference between them.  I adjusted the offset control for 0V output while recording a 0V input.  I then drove the CV In with a 16 step sequence and adjusted the scale trimmer until the VCOs tracked nicely.  Verification with my keyboard confirmed success.